STONY vs. STONEY: LET’S DEBATE IT!

1. In 1835 the Federal government commissioned N. H. Baird to carry out a

survey of the waterways from Rice Lake to Lake Simcoe, with a view to

establishing a route for what would eventually be the Trent Canal system.

I have not seen a copy of this survey, but the references I have seen to it are

consistent that in it, Mr Baird referenced ‘Stoney Lake’.

2. In 1836, “Backwoods of Canada” by Catharine Parr Traill was published. On

page 147, a map appears which references ‘Stoney Lake’. A scanned copy of the

original 1836 edition is available online at Library and Archives Canada

(collectionsccanada.gc.ca). One cannot be sure whether the ‘Stoney’ spelling

reflected a choice made by the author, or her publisher, or both.

is today Peterborough County and more. In it we find ‘Salmon Trout Lake’ and

book, chapter 5 is devoted to ‘A Trip to Stony Lake’. A scanned copy of most of

(collectionsccanada.gc.ca). Here as well, one cannot be sure whether the use of

‘Stony’ reflected a choice made by the author, or by the publisher, or both.

Samuel Strickland was the brother of Catherine Parr Traill and Suzanna

Moodie, and a leading citizen of Lakefield. In chapter XIV the book references

‘Stony Lake’. A scanned cop of the original 1853 edition is available online at

7. In 1882, “Picturesque Canada” was published. This was a scholarly work,

edited by G.M. Grant, then the Principal of Queen’s College, Kingston. One of

the many illustrations in it is of ‘Stony Lake, near Peterborough’ and there are

multiple references in the text to Stony Lake.

referred to Island 18 as located in ‘Salmon Trout Lake or Stoney Lake’.

9. During the period that surveying and construction work on the Trent-Severn

Parliamentary record (Hansard and supplementary estimates) but none that I

could find to Stoney Lake.

10. In 1907, Messers Roger and Edwards conveyed the lands that are today

owned by the ASLC to James Acton, Henry Sutherland and Samuel Henderson

without charge, in trust for a corporation to be incorporated as “The Stony

Lake Cottagers Association”. The deed references ‘that part of the Island in

prepared by J. J. Hazlett of record in the Department of Indian Affairs…’

spelling predominated in the years roughly before 1850 and was gradually

displaced thereafter by the Stony spelling.


2. The official name of the Lake

Q: Does the Lake have an official or government-approved name?

A: Yes: Stony Lake. This name officially applies to all of what is locally called

Official Canadian place names are determined by government. In Ontario,

Board, subject to the approval of the Minister of Natural Resources. The

Ontario / Ministry of Natural Resources website. Board decisions are used by

government ministries and agencies in the preparation of maps and other

Canada. The official name (i.e. Stony Lake) was adopted by the Place Names

Board in 1953. Prior to that time, the lake did not have an officially sanctioned

Q: What if anything compels individuals, businesses or other non-

government entities to use officially approved place names or officially

A: In principle, nothing compels individuals to use officially approved place

names. (Certain specific contexts, such as identifying where you live on a

passport application, might require otherwise.) It would be routine for an

Toronto. Neither Rockliffe Park nor The Beach / The Beaches has any official

status in Ontario as a place name. Curve Lake First Nation prefers to refer to

Petroglyphs Provincial Park as Kinomaage-Waapkong (“The Rocks That

Q: Was the Ontario Geographic Place Names Board justified in choosing

Stony Lake as the official name?

A: It depends on who you consult. Edwin Guillet believed it to be a mistake.

Alan Rayburn has a somewhat different take on it:

editor of the Globe & Mail as follows: 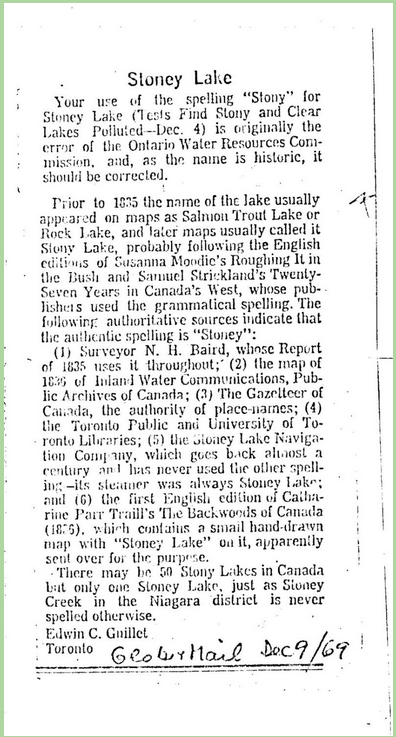 ALAN RAYBURN
Alan Rayburn is the former Executive Secretary of the Canadian Permanent Committee on Geographical Names, and the author of Naming Canada (1994). He has written extensively for Canadian Geographic Journal on Canadian place names. He is the author of Place Names of Ontario (1997). In that book, he had this to say about Stony Lake: 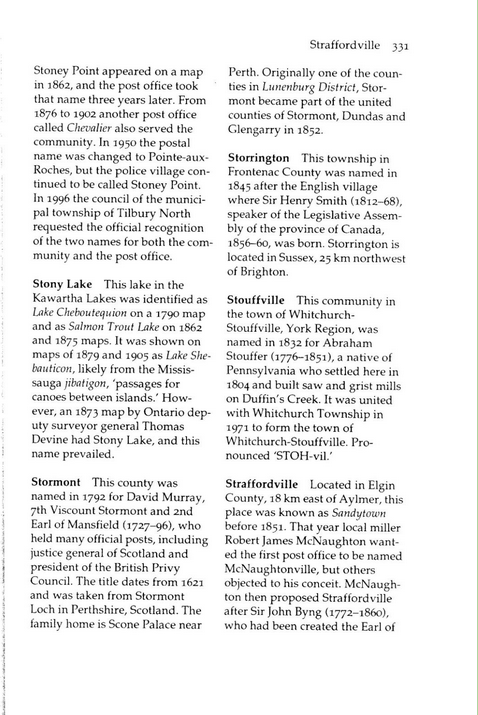 Q: Was the original choice of spelling (‘Stony’) inadvertent?
A: The available evidence suggests the spelling was a deliberate choice. As noted above, in 1907 the owners of Juniper Island donated a portion of the Island to the founders of the ASLC. The donors of the land, G. M. Roger and E. B. Edwards, were both Peterborough lawyers. Mr Roger had served as Mayor of Peterborough and was later appointed as a County Court Judge. Mr Edwards had served as the Peterborough City Solicitor. Messers Acton, Sutherland and Henderson, representing the ASLC, were senior local businesspeople. The donors would have known (see p. 2 above) that the deed they received in 1883 referenced Salmon Trout Lake or Stoney Lake, and the gentlemen who incorporated the ASLC would presumably all have had direct experience of the Stoney Lake Navigation Company and its steamboats including the Stoney Lake. In the circumstances, it unlikely that their collective choice in 1907 of the ‘Stony’ spelling in both the deed and the incorporation documents was accidental. It is far more likely to have been deliberate, and to have reflected prevailing usage as they perceived it.
Q: Was the switch to the ‘Stoney’ spelling in 1950 inadvertent?
A: It was no accident. There was a heated debate, chronicled in “From Burleigh to Boschink” by Kay Hooke and Christie Bentham. It is interesting to note that just a few years later, ASLC board minutes were once again being kept using the ‘Stony’ spelling.
Q: Is there any need for the spelling used in the name of the Association (“Stoney”) to match the spelling (“Stony”) used in the Canada and Ontario registries of approved place names?
A: None whatever. The name of the Association is a matter for the members to decide, within certain broad limits none of which are likely to be relevant here.


Q: Has the issue of the spelling come up at membership meetings since 1950?
A: It appears to have been raised during at least three annual meetings held since 1950:

4. Dictionaries
Q: Is ‘stoney’ recognized as a dictionary word?
A: In all but two of the dictionaries I have consulted, ‘stony’ is either the preferred spelling or the only recognized spelling. One dictionary that unequivocally accepts ‘stoney’ is the official Scrabble dictionary. The Scrabble dictionary does not give citations for the words it accepts. The Dictionary of Canadian English (1967) accepts “Stoney”, but only when capitalized and used as an alternative term for native Canadians of the Assiniboine nation, based in Western Canada.


Q: What if you consult a dictionary from the 1800s?
A: A fascinating question. The best known dictionary in English prior to 1800 was Samuel Johnson’s dictionary, published in various editions starting in 1755. In the 1792 and 1828 editions, scanned original copies of which are available online, only ‘stony’ is accepted and the references given include Milton, Dryden, Spencer and Swift. Two leading English-language dictionaries of the 19th century were Webster’s in the United States and the Oxford English Dictionary in England. In the 1828 edition and the 1848 edition of Webster’s American Dictionary of the English Language, scanned original copies of both of which are available online, only ‘stony’ is accepted. In 1857, Richard Chenevix Trench published a devastating critique of the dictionaries of the day and initiated a movement in England that led to a complete re-examination of the language from Anglo-Saxon times onward. The result, the extraordinary Oxford English Dictionary (OED), was published in ten volumes in stages between 1884 and 1928. The OED only accepts ‘stony’. The extensive entry in the OED under ‘stony’ lists many earlier spellings including stoni, stonie, stoany, stanie and stoney. The ‘stonie’ spelling, for example, can be found in the 1611 version of the King James Bible, an scanned original copy of which is available online.
Q: How significant is it that ‘stoney’ is not the preferred spelling in standard dictionaries?
A: The significance, if any, is debatable. A great many place names are not dictionary words. Montreal, Toronto, Ottawa and Banff are simple examples from an extremely long list. Note that place names that are not dictionary words often have some form of historical derivation, e.g. Vancouver commemorates Capt. George Vancouver, Montreal comes ultimately from Mount Royal, and so on. There is some evidence to suggest that Stoney Creek, Ont. was named after an early settler by that name. I have not heard of any similar association which might explain the ‘stoney’ spelling in our context. It seems more likely that ‘stoney’ is simply an alternative spelling of ‘stony’, an adjective which would easily come to mind when contemplating the Lake, especially before water levels were raised. The ‘stoney’ spelling was clearly still in use, although very likely in decline, at the time confusion started to become evident.
A preference for using the ‘Stoney’ spelling today can be seen in part as a way of commemorating those early settlers and writers who chose (or whose publishers chose) to use the ‘Stoney’ spelling. It also commemorates some of the more romantic aspects of the history of the Lake, such as the Stoney Lake and other steamboats operated by the Stoney Lake Navigation Company. A preference for using the ‘Stony’ spelling can be seen in part as a way of commemorating those who established the ASLC in 1907 and through whose efforts and foresight we today enjoy the lands at Juniper, the Pavilion, the Store and the Boathouse. Arguably, each spelling celebrates and draws attention to different but important aspects of our common heritage.
5. Other usage
Q: What spelling have other organizations around the Lake adopted?
A: The Upper Stoney Lake Association clearly favours the Stoney spelling. I understand that both St. Peter’s on the Rock and the Stony Lake Yacht Club have consistently used the ‘Stony’ spelling. The Stony Lake Heritage Foundation has consistently used the ‘Stony’ spelling. The Stoney Lake Sprint prefers ‘Stoney’. I am unable to supply a list of other organizations that have been active on the Lake over the years or to confirm what spelling (or spellings) they respectively used.
6. Historical Atlas of Peterborough County
One resource to be treated with a bit of care is the Historical Atlas of Peterborough County. It has the appearance of being an early atlas of the County, but it actually dates from 1975. The Forward to the Historical Atlas explains that in the 1870s and 1880s, illustrated historical atlases were prepared for many of the counties in Ontario. Unfortunately, none was ever prepared for Peterborough. The Historical Atlas of Peterborough County was sponsored by the Peterborough County Historical Society as a Centennial project in an attempt to fill that gap. In the Atlas, every effort was made to write the history of the area as it would have been written a century earlier. However, the Historical Atlas is ultimately the product of modern hands.


Note 1: In his 1969 letter to the Globe & Mail, Edwin Guillet cites the Gazetteer of Canada in support of the ‘Stoney’ spelling. This is difficult to understand. I have a copy of the Gazetteer as published in 1974, and for our lake, it accepts only ‘Stony’. The Ontario place names directory (being the basis for Ontario place names in the Gazetteer of Canada) is available online and the online database shows only ‘Stony’, giving 1953 as the official adoption date. Mr Guillet’s letter references, without explanation, “the Toronto Public and University of Toronto Libraries’. That too is difficult to understand, as libraries rarely take positions on issues like this on, but instead act as neutral repositories. Finally, Mr Guillet’s letter references the spelling used in a book by Catherine Parr Traill, with no mention made of the fact that in books written just a few years later by her sister (Suzannah Moodie) and by her brother (Samuel Strickland) the ‘Stony’ spelling is used. All in all, it is hard to see Mr Guillet’s letter to the Globe & Mail as a balanced piece of historical research.

This site is funded by Gail and Jay Burton